The Moonbeam Foundation (“Foundation”) is committed to the longevity, development, and security of the Moonriver network. We recognize that transparency is core to the sustainable success of the network. As part of this commitment to transparency, we are providing the community the following information on the Foundation’s token holdings, token actions to date and token supply.

Foundation Objectives & Statement of Use

(ii) Security and protocol development: the Foundation uses tokens from the “Long-Term Network Stewardship and Adoption” allocation for a variety of initiatives that help ensure network security and that help drive the protocol’s long-term utility. These include supporting security audits, core protocol development, integration and testing of parachains and remote chains, infrastructure related test and integration environments, public RPC endpoint services, block explorers, developer support, education, and documentation, etc. The Foundation encourages teams that can provide these kinds of services to apply via the Grant Program or through the Treasury.

(iii) Grants and ecosystem development: the Foundation uses tokens from the “Developer Adoption Program”, “Community Initiatives and Parachain Slot Reserve” and the “Long-Term Network and Stewardship & Adoption” allocations to continue to attract cutting-edge teams and builders to Moonriver through cash or token grants, competitions, and programs. In addition, the Foundation assists in ecosystem development by supporting teams with grants and through user-adoption initiatives. Selection for these initiatives are based upon a myriad of factors including the team’s technical capabilities, their product innovation, and market sentiment.

In order to achieve these stated objectives:

The Foundation has published below the non-circulating and circulating genesis* addresses of the tokens held under Foundation control for the community to monitor.

*This account was not a genesis address but was subsequently added to the list above to maintain reporting transparency.

As of July 31,2022, total MOVR supply was 10.4M, consisting of 10M genesis supply and 417k cumulative net inflation (defined as newly minted MOVR less burned transaction fees). Cumulative gross inflation since network launch totaled 424k through period end, reflecting a 4.24% increase over genesis supply of 10M. Actual gross inflation was below the 5% annual inflation rate target primarily due to average block times exceeding the 12-second assumption used to support this target. From February through May, in particular, average block times rose by ~70% and reached a daily average high of 28 seconds on April 6, 2022 (source: Moonscan) due to an underlying relay chain issue (more technical detail is provided here). However, improvement was observed in May with the release of the Kusama v0.9.20 and v0.9.21 upgrades as block times returned to more normalized 14-15 seconds, on average.

Since the launch of the network, approximately 297k MOVR tokens have been minted and distributed to collators and delegators in the form of inflationary protocol rewards consistent with MOVR’s inflation model. Collators and delegators are integral to the security and sustained operation of the network and, as such, earn a proportionate share of the supply’s 5% target annual inflation rate for their network contributions (20% and 50%, respectively).

In line with MOVR’s token economic model, approximately 80% of transaction fees related to smart contract execution are burned and removed from token supply. It’s worth noting that cumulative burnt fees don’t precisely match the 80% targeted proportion due to imprecise fee calculations in earlier Moonriver releases, resulting in the issuance of additional rewards to collators instead of these MOVR being burned. The overall increase to supply was 2.6k MOVR (0.026% of genesis supply), which was more than offset by the lower amount of inflation attributable to slower block times (mentioned above). The other 20% of transaction fees are allocated to the community-controlled treasury. As of July 31st, 2022, 2.1k MOVR have been sent to the treasury through its proportionate share of transaction fees.

Approximately 47.3% of total MOVR supply has been released into circulation as of July 31st, 2022, which is further detailed in the sections below. 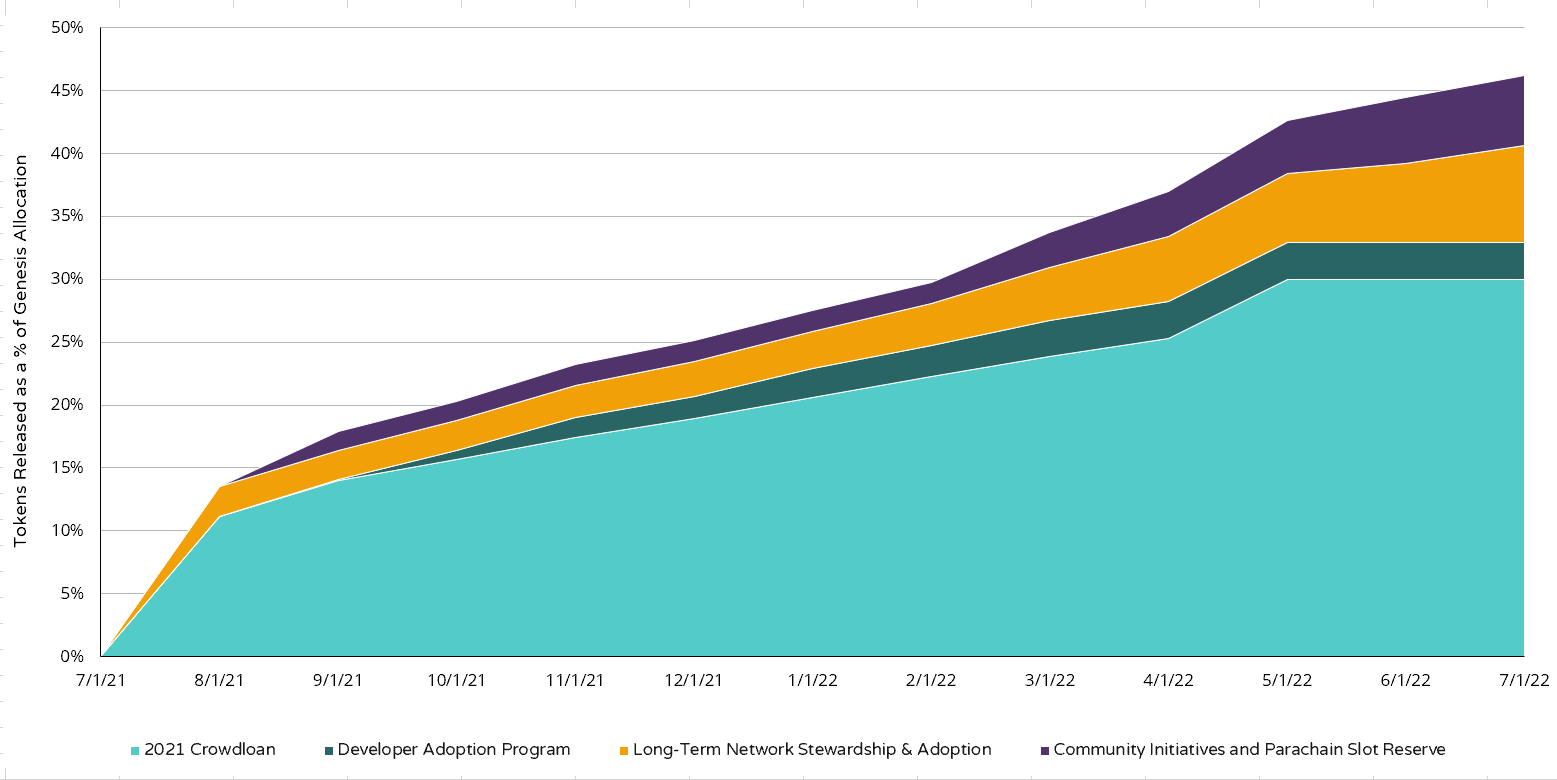 The release of MOVR into circulation from select non-circulating genesis allocations is reported on a cumulative basis since network launch as well as for the subject 5-month reporting period (the subject period is condensed for this specific update, i.e., less than 6 months, in order to report on the same cadence as Moonbeam). Going forward, updates to the transparency pages will be bi-annual.