How to Unbond Your DOT Tokens in Preparation for Crowdloans

On October 13, Gavin Wood and Robert Habermeier unveiled the highly anticipated news that Polkadot is ready for its first parachains to launch. A motion was sent to Polkadot Council to open up the network’s first parachain slot auctions, proposed to begin on November 11th, 2021. If you plan to participate in any crowdloan auctions, you’ll want to unbond your DOT tokens as soon as possible. As a reminder, the unbonding process takes 28 days to complete before your DOT tokens are freely transferable again.

A crowdloan is a funding mechanism that allows DOT holders to support a project by locking their tokens until the end of the lease of the slot. The parachain project can use these tokens to pay for a parachain slot on the network for the duration of the lease (up to 96 weeks on Polkadot) after which point the original DOT tokens are returned to contributors. Parachain teams are free to reward contributors however they see fit. You can learn more about the basics of a crowdloan in this article.

To contribute to a crowdloan campaign, you need to make sure your DOT tokens are transferable, and therefore, available. If you have nominated validators on the Polkadot Network, those staked tokens will be locked unless you have explicitly unbonded them (this does not happen automatically). Unlocking them is a two-step process:

Tokens might be locked (bonded) as well via other mechanisms such as democracy. To learn how you can unbond tokens locked through democracy you can check this Polkadot wiki article.

This tutorial will guide you through the process of how to check if your tokens are ready to contribute to a crowdloan, and if not, how to unstake/unbond them to have them ready. A separate tutorial on how to participate in the crowdloan itself will be provided shortly.

If the account used was imported from a Ledger hardware wallet, make sure you have the device connected to your computer and unlocked, as you will need to sign a few transactions with it. This guide assumes you have DOT tokens on a self-hosted wallet. If you’re currently staking DOT on an exchange such as Kraken, the unstaking and unbonding process might be as simple as just a few clicks, but you’ll need to check with the exchange for exact instructions.

The Difference Between Unstaking and Unbonding

Unstaking is the action of removing a nomination for a validator (or multiple validators). By unstaking all nominations, your tokens will stop earning staking rewards and are ready to be used to nominate another validator. However, they are not yet ready to be transferred. Once the nomination is no longer active, the tokens are still bonded (locked). You will need to take the additional step of unbonding them in order to use them for a transaction or crowdloan.

In general terms, bonding is a process by which tokens are temporarily locked. Staking is one of the scenarios that requires tokens to be bonded. Unbonding is the action of telling the network that you want to unlock these tokens. After the unbonding time, which is 28 days for Polkadot, you can withdraw the tokens, and they become a transferable balance.

Any DOT tokens that have been used for staking will be displayed as part of your locked balance. To check this, visit the Polkadot JS apps and ensure you’re connected to Polkadot (in the top left corner). Once the app is connected, you can take the following steps: 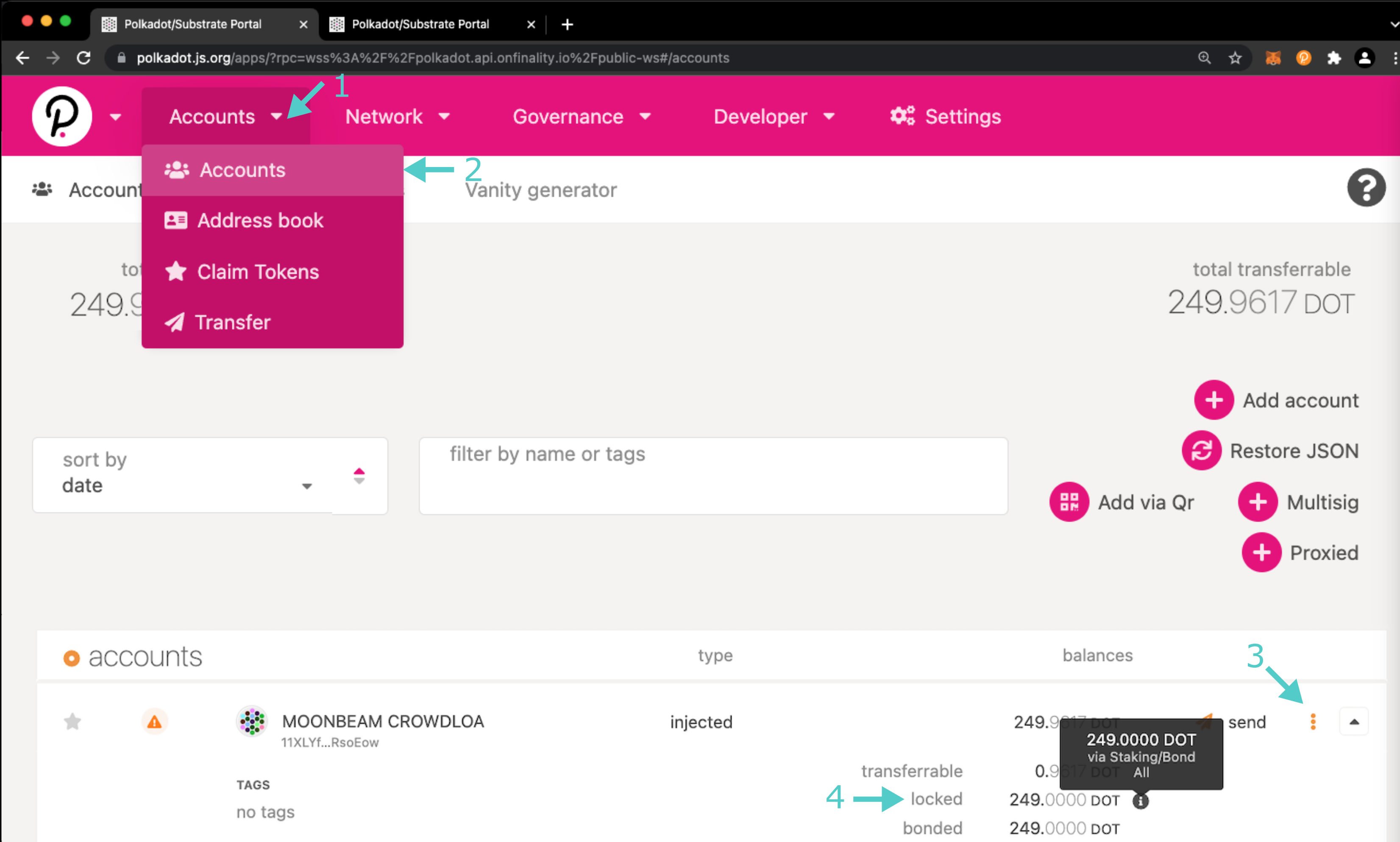 You can see in the screenshot above that you have three balances: transferable, locked, and bonded. The balance that shows as “transferable” can be used to contribute to a crowdloan campaign. However, the balances that show as either locked or bonded because of staking can’t be used. The following sections will take you through a step-by-step guide on how you can unstake and unbond your locked DOT.

How to Unbond Your DOT Tokens

If you have locked DOT tokens as previously shown, you can directly unstake and unbond them using a single action, which is “Unbond funds”. Unbonding takes 28 days on Polkadot.

First, you need to head to the Staking options. To do so, take the following steps: 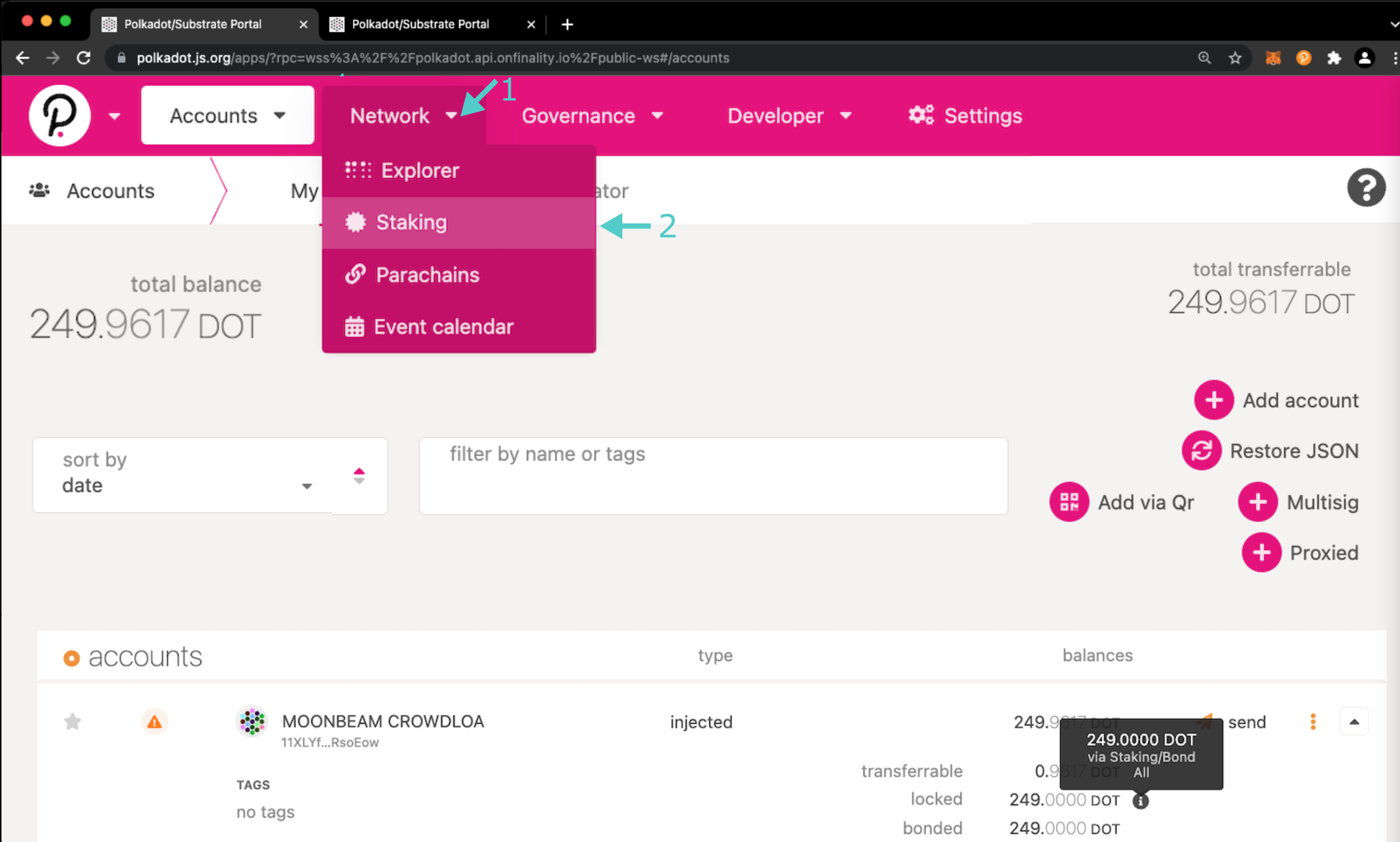 This will load the staking overview window. In here, navigate to the “Account actions” tab, from which you manage everything related to your account’s staking. 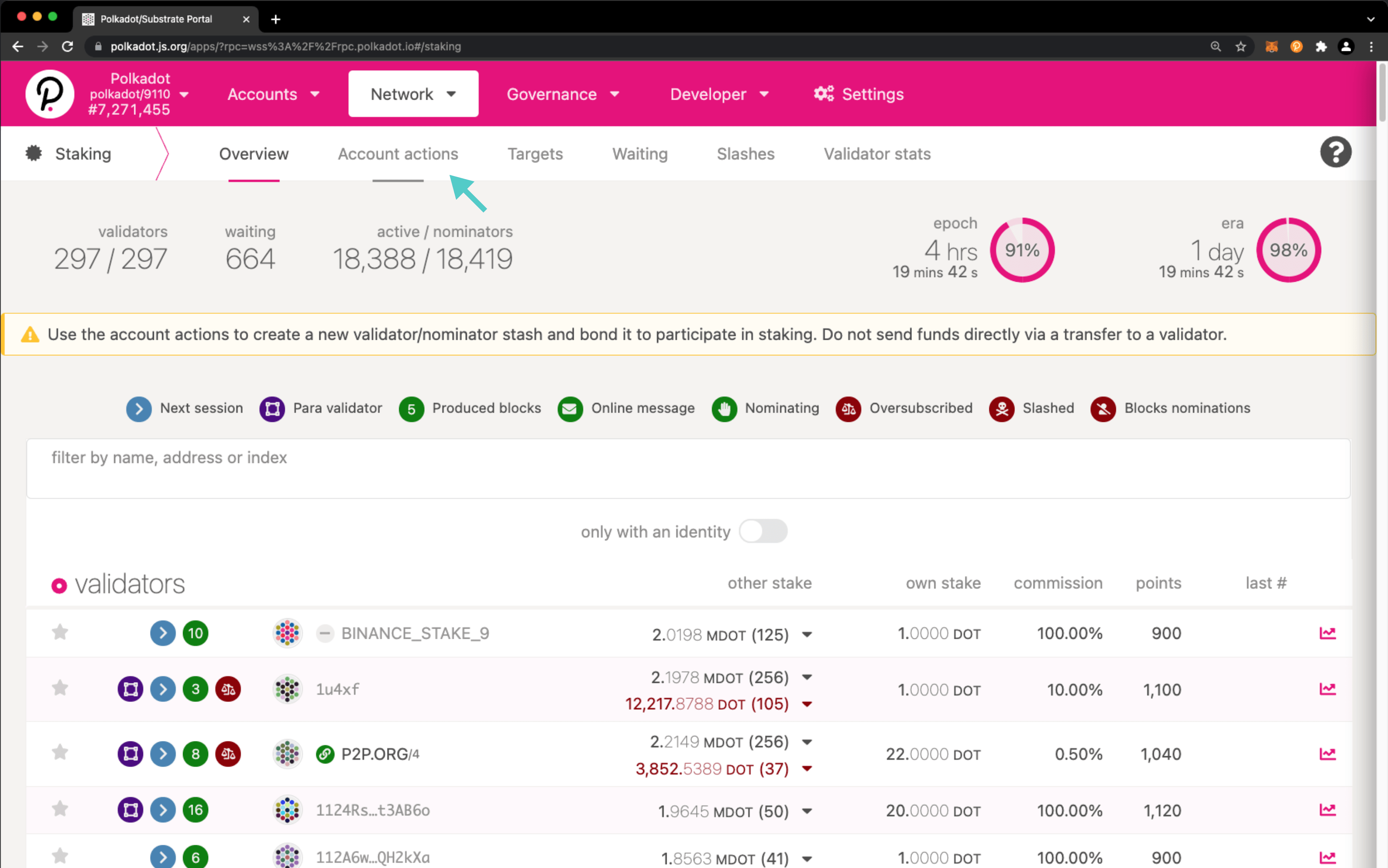 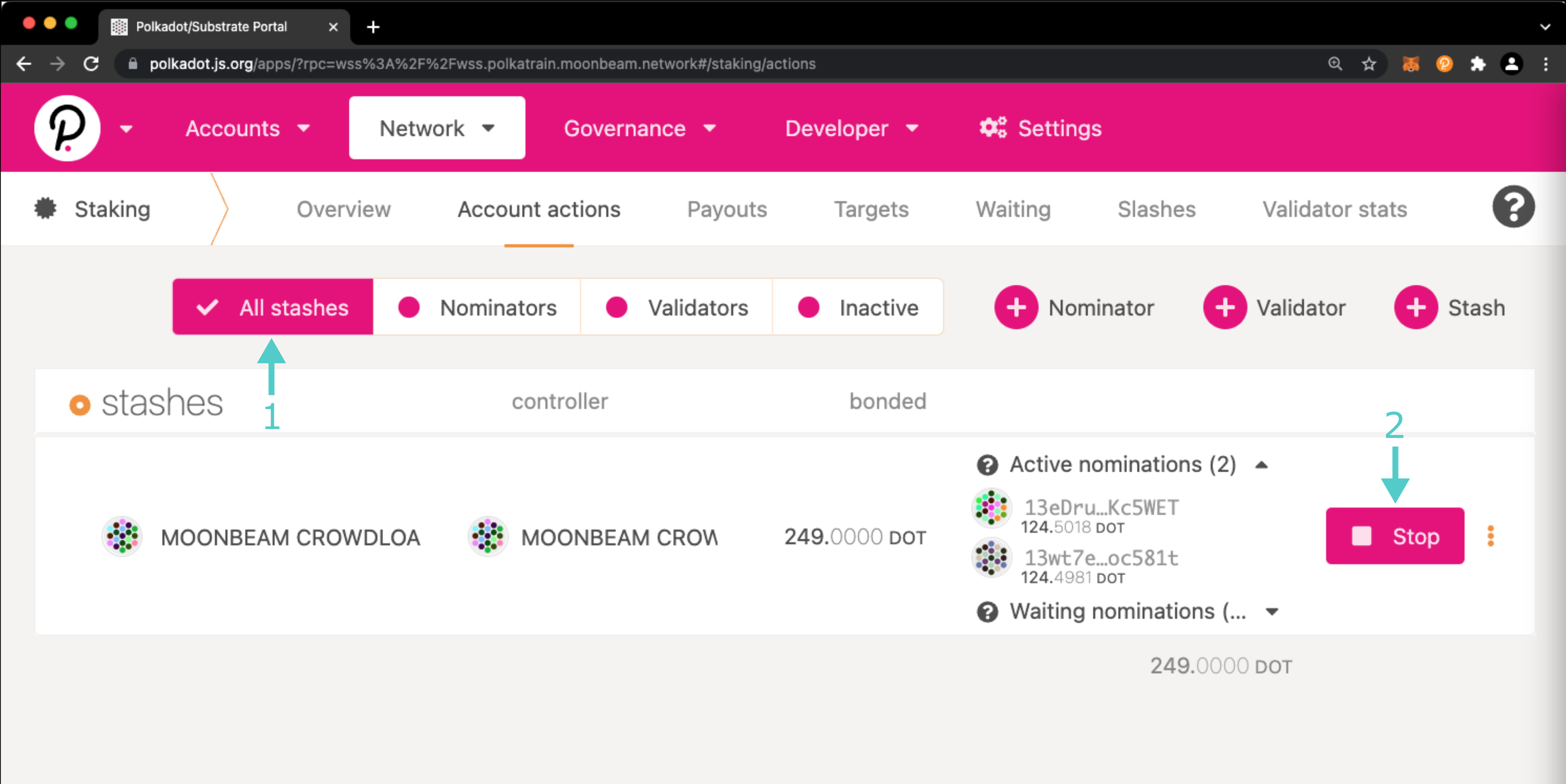 These actions will initiate a transaction wizard titled “unbond funds”, in which you need to: 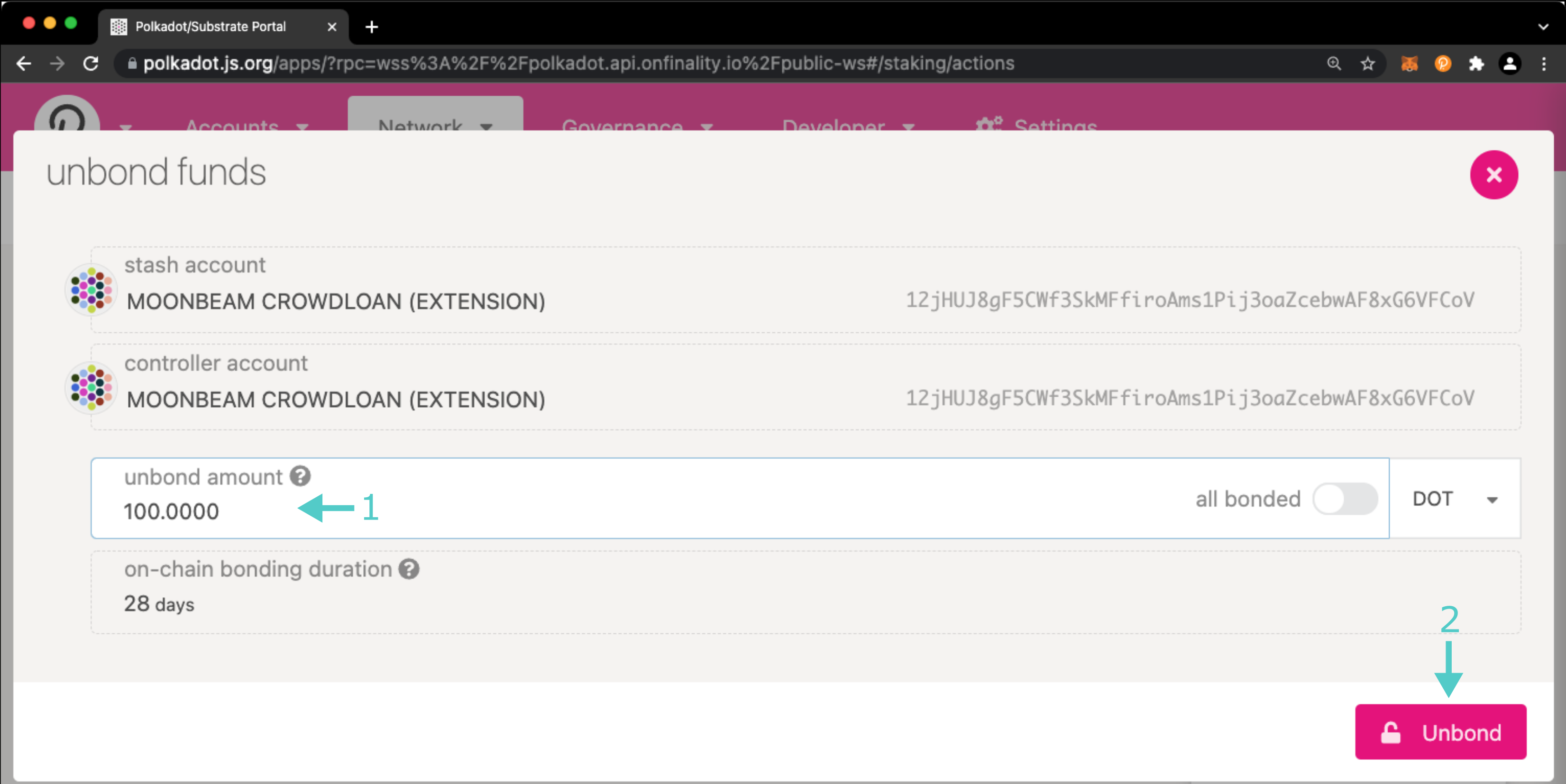 To check the status of your unbonding, take the following steps: 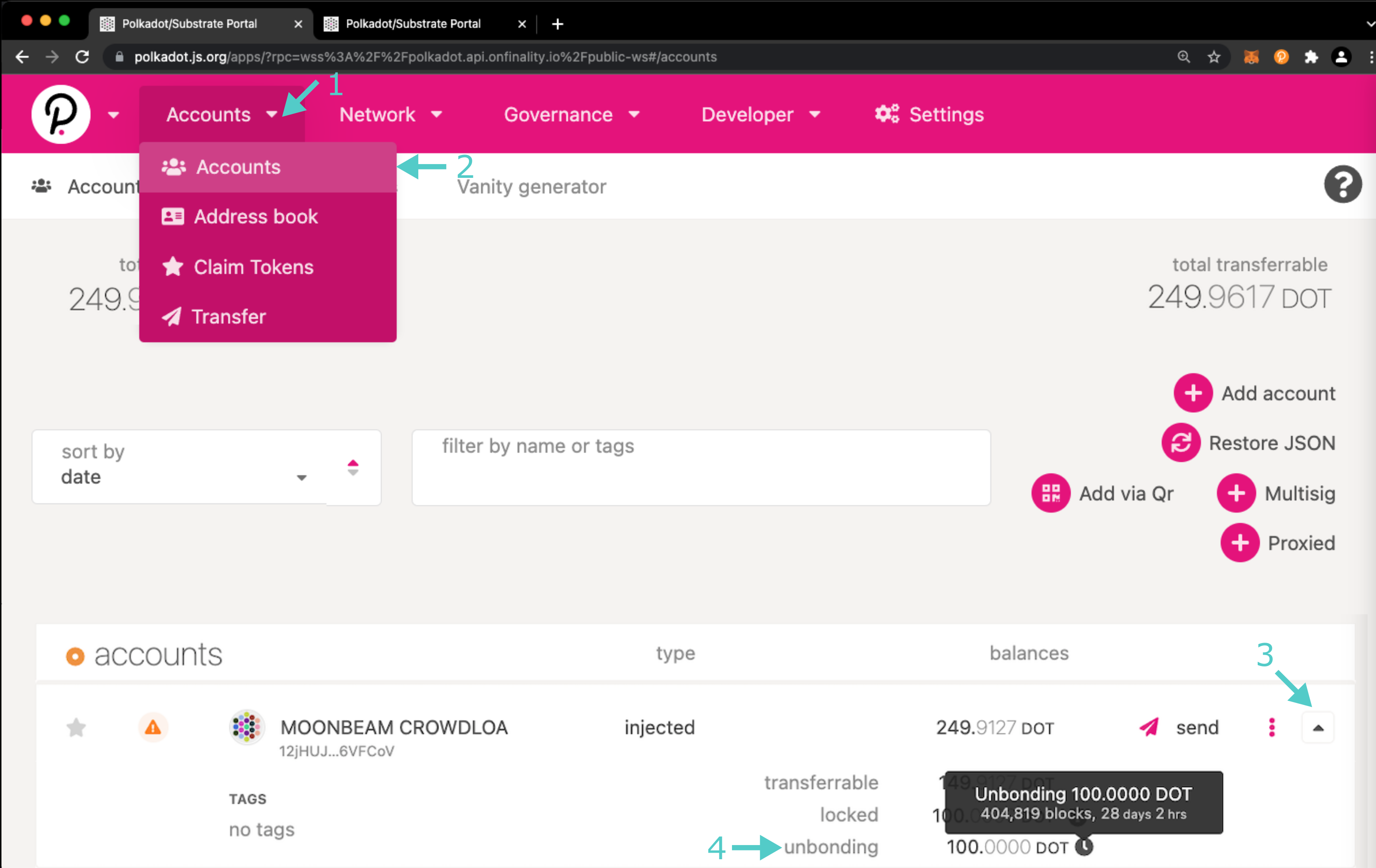 Once the bonding lock expires, you need to submit another transaction to withdraw the funds manually.

How to Withdraw Your DOT Tokens Once the Lock Expires

After the unbonding time expires, you can withdraw your locked tokens. To do so, head to the “Accounts > Accounts” tab and take the following steps: 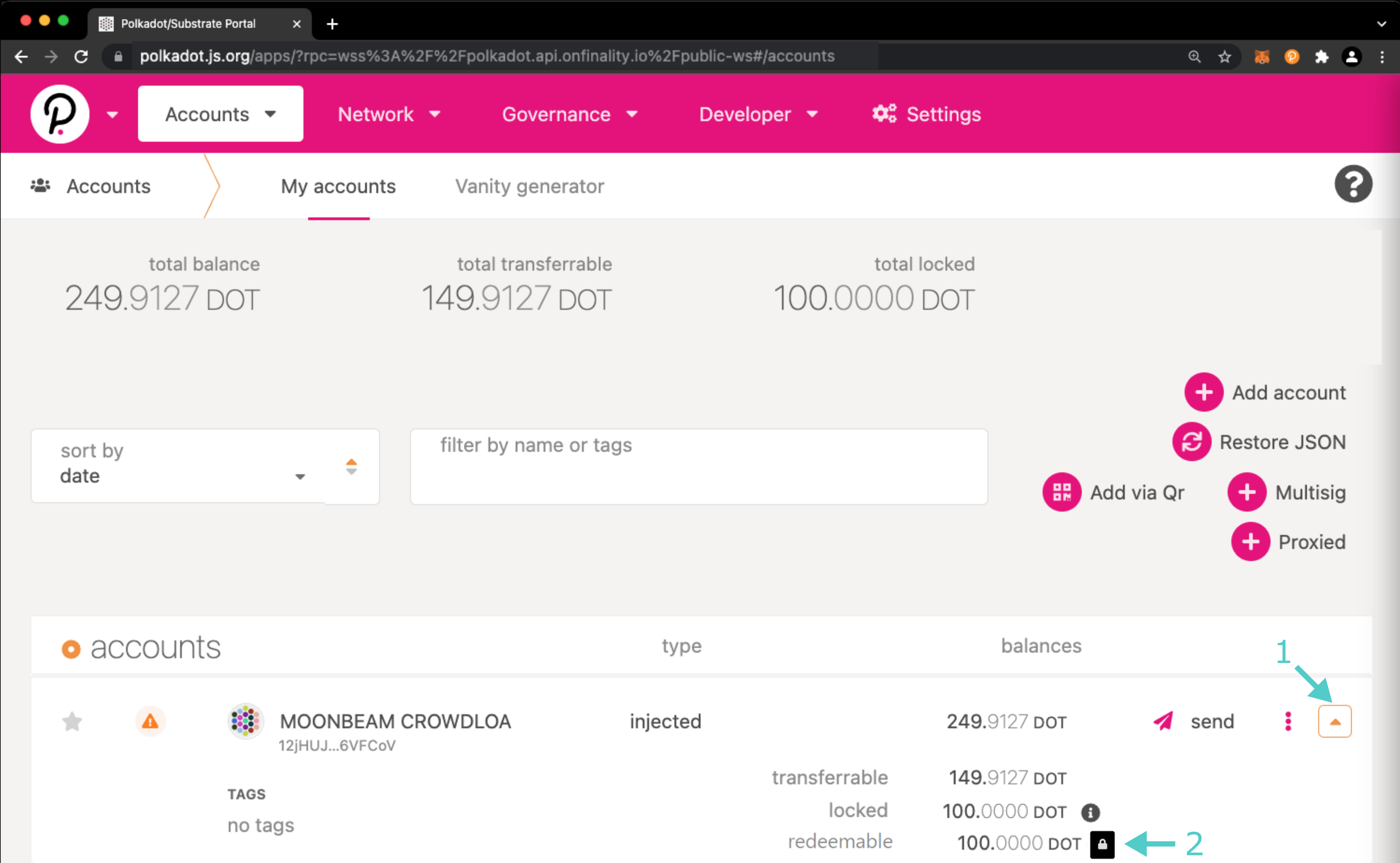 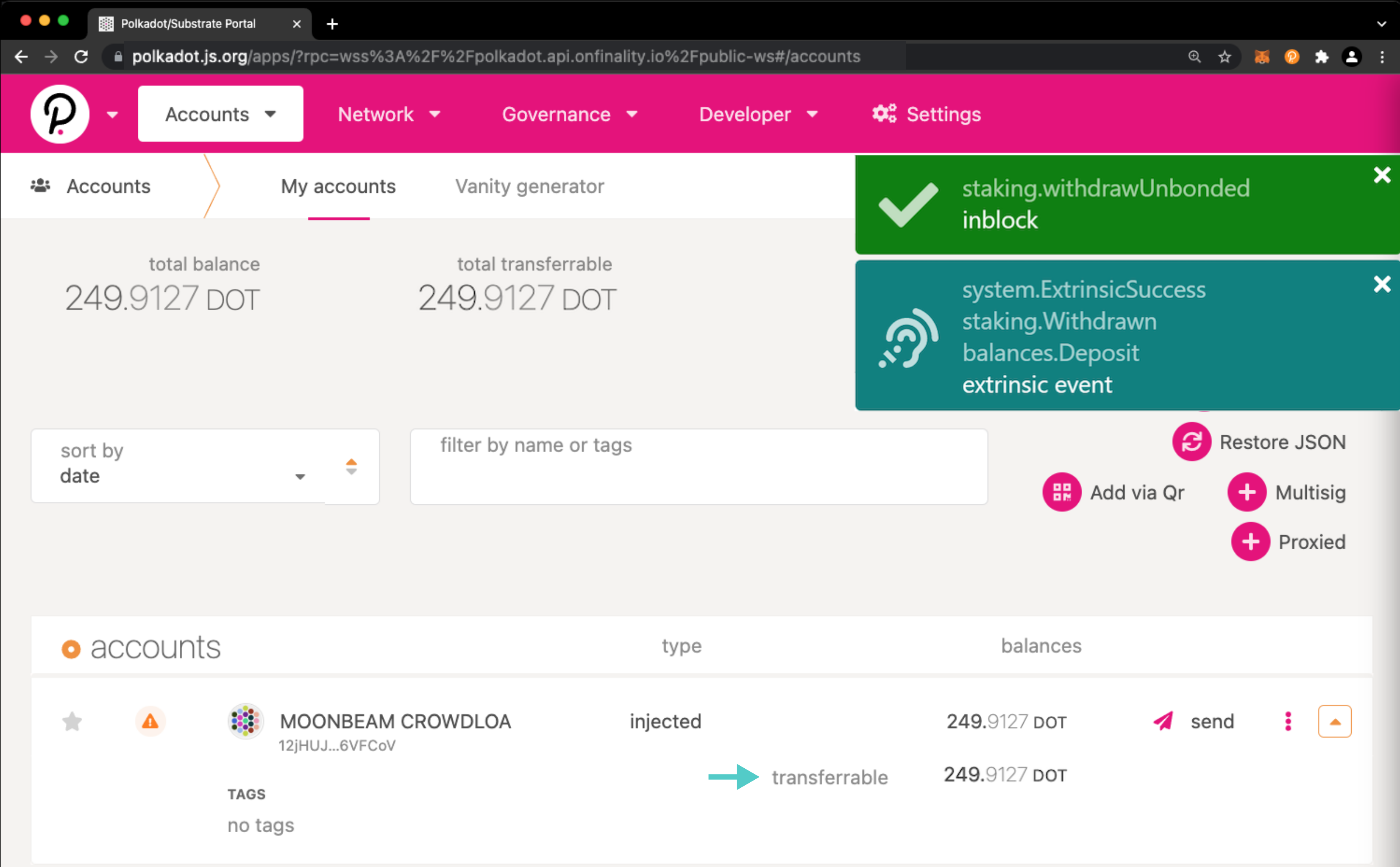 And that is it! You have successfully unstaked and unbonded your DOT tokens! 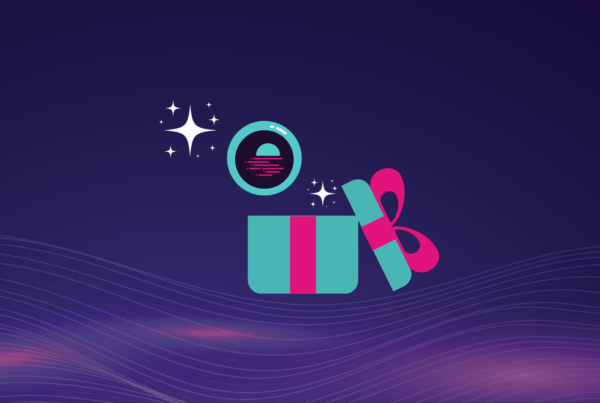 How to Claim Moonbeam Crowdloan Rewards 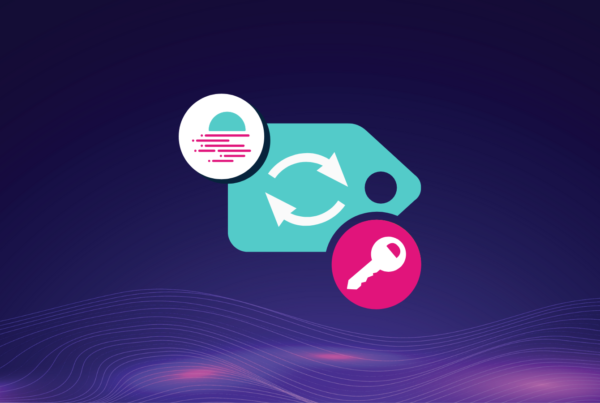 How to Change the Moonbeam Address Provided for GLMR Rewards 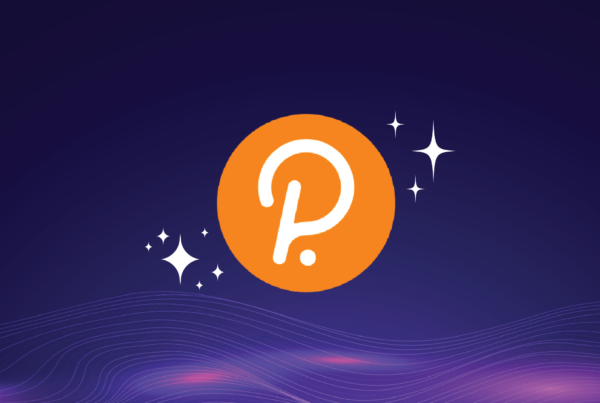